Most of what remains of “Hydrarchos”. All images © courtesy of the Museum für Naturkunde, Berlin.

A bit of introduction is necessary, perhaps. The story of Hydrarchos itself has been told many times, although few have really looked into it in-depth.1)Perhaps the best introductory treatment is given by Brian Switek (2010). Written in Stone: Evolution, the Fossil Record, and Our Place in Nature. New York: Bellevue Literary Press, 145-173. Last week, during the museum’s Knowing Things conference, Lukas Rieppel held a plea for Koch as a sincere and respected collector – as opposed to the sheister he’s usually made out to be. Lukas is going to publish on this subject, and it’ll be interesting to read the case he’s going to make.2)I hope he won’t mind me remaining resolutely on the fence until then. From that point onwards, its fate becomes a bit unclear; in subsequent reorganisations of the collection, it seems to have been placed at the anatomical cabinet3)Today part of the Charité Hospital’s Museum of Medical History. initially, and then in the geological-paleontological museum, one of the museums in the Museum für Naturkunde, in 1889.4)The museum building itself was opened in 1885, containing the zoological and mineralogical collections; the geological and paleontological collections from the mining school were incorporated into the new geological-paleontological museum four years later. Up to this day, despite being housed in the same building, the three museums remain as separate administrative entities.. A large part of the specimen(s) was (were) destroyed when the Museum was bombed in 1945. 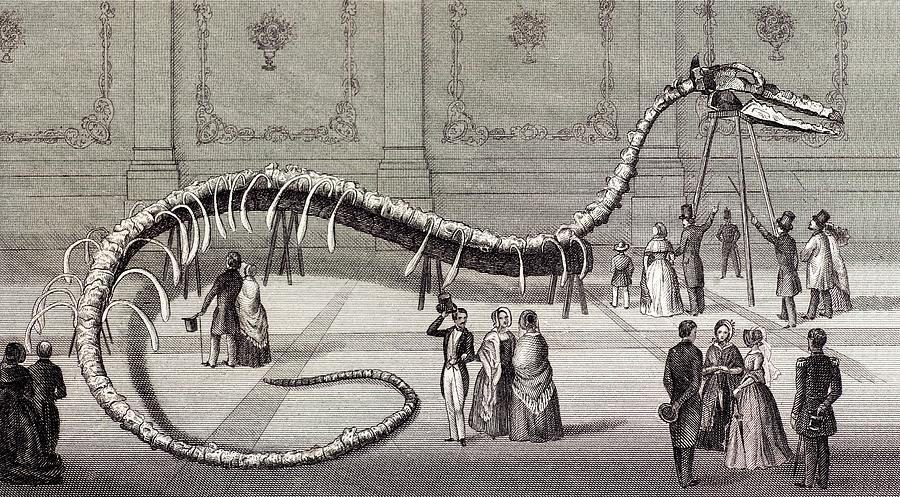 Happily, a helpful soul pointed my attention to an exhibition catalogue from 2000 which mentioned the museum’s Basilosaurus fossils, along with some information on Hydrarchos.5)“Kabinett der Naturgeschichte”, in: Horst Bredekamp etc. (2000). Theater der Natur und Kunst – Theatrum Naturae et Artis. Berin: Henschel, 141-143.  This information allowed us to get in touch with the museum’s curator for fossil mammals, and last week we received the opportunity to meet up with our hero.6)‘We’ contains Lukas Rieppel, Chris Manias and yours truly Some traces of Koch’s handiwork on a “Zeuglodon” mandible. . All images © courtesy of the Museum für Naturkunde, Berlin.

Not a lot of Koch’s specimens is left; one cupboard-ful and some other scraps remain.7)To be precise: several vertebrae, some teeth, fragments of both jaws, part of a humerus, one posterior skull section, and casts of various skull parts Koch’s preparation of his display was notoriously shoddy, and most of the fossils received further preparation in the century and a half after their purchase. But we found one mandible fragment that seemed to be in near ‘original’ condition.