The wonderful creatures of the Valkenburg County Cave (Updated)

The town of Valkenburg is located in gently rolling hills on the southern border of the Dutch isthmus of Limburg, bordered by Belgium to the south and west, and Germany to the east. For centuries, people have been mining the rich sandstone deposits in the area, and have thus stumbled upon numerous fossils. Perhaps none are more famous than those of Mosasaurus. The first of these was found in 1764 and now resides in the wonderful Teylers Museum in Haarlem (which also happens to be my part-time employer). The other, found around 1772, found its way to Paris through the evil machinations of the devious French (note that I’m not judging anyone).

Through time, numerous caves have been created by man, running the length of the southern Dutch border. Because they were never charted, anyone that went in unaccompanied did so at his peril, because finding your way out was not guaranteed. While I visited the caves on a school tour in the 1980s, I was regaled with grisly tales about the encounters miners had had with dried-up skeletons that had found their death desperately looking for an exit.

Mining stopped after the 1950s, with the exception of the St. Pietersberg near Maastricht. The caves, of course, remain. At the end of the 20th century, the Valkenburg county council decided to open up the caves to tourists. It is a fascinating place to visit because of its layered history, which in addition to mining sandstone includes being used as a chapel, a refuge for cold winters and hot summers, a hiding place during the last days of the Second World War and an atomic bunker designed to house 15,000 people. The history of the caves is explained in a colorful (but Dutch-only) book by John van Schaik.1)John van Schaik (2011). Gemeentegrot Valkenburg aan de Geul. Valkenburg: Europe Subterranea.

An interesting part of this historical smorgasbord is made up by a number of sculptures and drawings various extinct animals that go back to the late 19th century. They feature several murals of Mosasaurus, a sculptures of a “giant tortoise” (probably modeled on the Archelon remains found in the nearby St. Pietersberg) a relief of the Mosasaur Plioplatecarpus hacked out of the soft sandstone rock face and, perhaps most weirdly, a similar relief of a Megalosaurus. Unfortunately, Van Schaik’s book devotes little attention to these creations. The presence of Plioplatecarpus is not really all that remarkable, given its local origin. Still, it’s interesting that the sculptor, Jean Caelen, did not choose the far more famous Mosasaurus. It looks a bit stocky for even a mid-19th century reconstruction of a mosasaur, to be honest. The same artist also produced a Megalosaurus, which to me is the highlight of the cave.

This toothy eminence clearly owes quite a lot to Benjamin Waterhouse Hawkins’ reconstructions at Crystal Palace Park, just like the Mosasaurus mural appears to find some of its inspiration in Thomas Hawkins’ mid-century Book of the Great Sea-Dragons. The inscription mentions that Caelen produced it on May 4, 1895, so the depiction didn’t exactly take the latest insights into account. Van Schaik mentions how it looks very similar to the nile crocodile from Faujas de St. Fond’s Natural History of the St. Pietersberg from 1799, and it does in a number of details. Even so, I see more of an amalgam of that illustration with Hawkin’s work.2)Van Schaik, p. 129 about Faujas de Saint-Fond, Barthélemy (1799). Histoire naturelle de la montagne de Saint-Pierre de Maestricht. Paris: chez HJ Jansen, p. 391.. 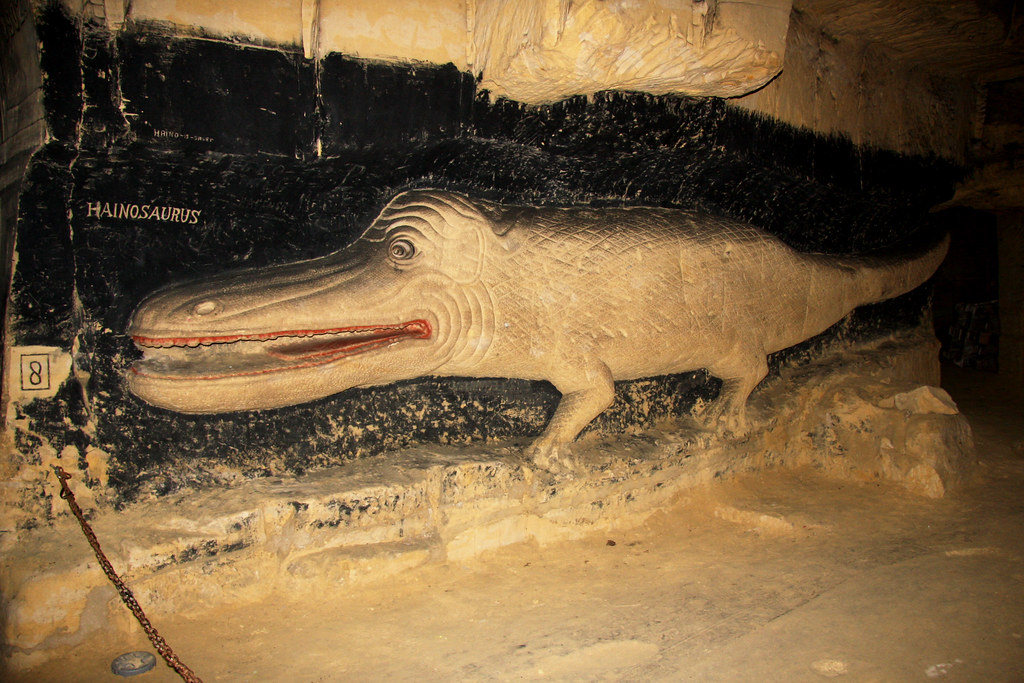 However, the weirdest creature of the lot must be the “Hainosaurus” that can be found near Caelen’s Megalosaurus. I don’t know what this creature is, but it hardly looks like the mosasaur even Dollo thought it to be in 1891.3)Louis Dollo (1891). La vie au sein des mers. Paris: Librairie J.B. Baillière et Fil. What we get instead is some weird reptilian hippopotamus that looks drawn out of a Lewis Carroll book. Van Schaik makes no mention of it, and it doesn’t seem to match the standard of workmanship in the other sculptures, so it’s doubtful whether this one was made by Caelen as well.

Jean Caelen was a master blacksmith from Valkenburg, who ran a store in tools and iron materials. In addition, he was appointed a mining inspector somewhere around 1890.4)Van Schaik 2011, p. 115-6.. As such, he was responsible for the safety of the miners, and spent a fair amount of time down the caves. Judging by the scale of these sculptures, it wasn’t the most time-consuming of jobs: one is left with the impression that Caelen (and his brother Joseph, who sometimes assisted him) had a fair amount of time on his hands.

These reliefs, and the paintings surrounding them, are very much amateur efforts, but respectable ones. The sheer scale of Caelen’s work, and also his skill in working the sandstone caves, is actually quite impressive even if from a scientific viewpoint the result leaves something to be desired. We don’t know exactly what Caelen’s motivation was, but the cave itself was opened to the public in 1885, and Valkenburg began to taste the advantages of the burgeoning tourist industry.5)Van Schaik, p. 122 f. And most of them weren’t the backpacked rabble that we’ve grown to love today; the town became known as a hotspot for a decidedly up-market sort, which made the exploitation of tourist traps a lucrative undertaking.

I shall post more if I have more information, but I should be grateful for anyone’s contribution. And I’m dying to find what book Caelen based himself on. That Hainosaurus must come from somewhere. After I visit the cave later this summer, expect a more extensive report. The cave is publicly accessible and one can book accompanied walks through them. Better still, there’s even a tour aboard a narrow gauge railway that runs in the caves. More information here.