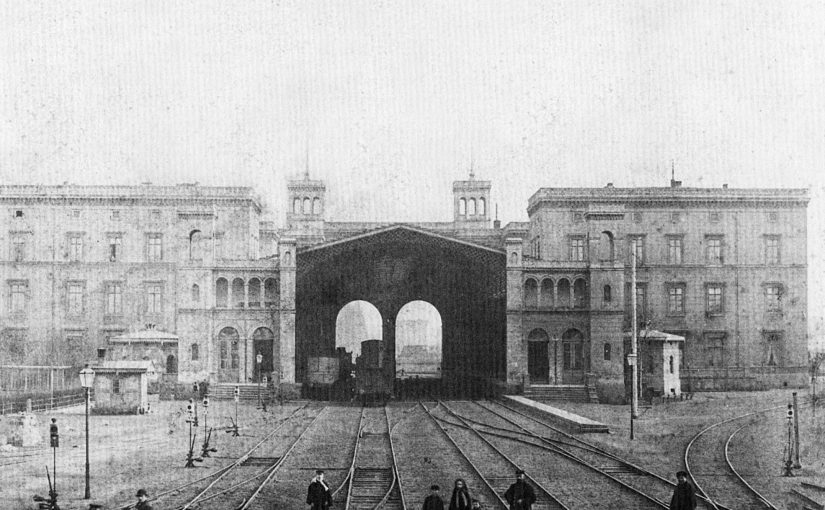 Note: this post remains a work in progress as I work on the other chapters. Feel free to comment directly, or get in touch via e-mail if you feel it could be improved.

Many who arrive in Berlin will do so by train. Thanks to Germany’s excellent railroad infrastructure, the journey is usually comfortable and quick, and drops you off right in the centre of the German capital. Granted, Hauptbahnhof is rather cramped for the amount of traffic it receives and it’s not fully hooked up to the subway station yet (a situation which is going to change quickly), but it takes only minimal effort to get wherever you need to go – even if that destination lies outside of the city.

It used to be very different. Before the Second World War, Berlin was a city meant to arrive in, and not so much one to traverse on your way to a different place.1 Around the centre of the city, a number of large terminal stations was constructed in the course of the 19th century, each named after and leading to a different destination. The Anhalter Bahnhof carried passengers to and from Anhalt, the Potsdamer Bahnhof to and from Potsdam… you get the idea.

Everyone who’s suffered the misfortune of having to traverse Paris or London using a rickety underground train on the way from the Gare du Something to some other Gare will get the idea of the reality of that situation. Ideal it was not. For the large majority of travelers, however, that was not a consideration: they came to Berlin to work, to see the city or to take care of business. Or they left it for a holiday, to travel to other cities and countries, or to visit family.

It was something of an accident that the capital’s railway infrastructure developed the way it did, the consequence of a railway system build on private enterprise combined with Berlin’s explosive growth as a city. At the beginning of the 19th century, what was then the Prussian capital contained 172,000 people. By the time the German Empire was founded in 1871, it had grown to just over 800,000; at the time World War One came around in 1914, it was nearly 2 million. And even that does not tell the whole story since many boroughs that are now part of Berlin were then independent cities. When Greater Berlin was formed in 1920, the population of the city more than doubled, to 4,5 million.

That put an enormous strain on all transport infrastructure, including the railways. Lines and stations couldn’t be built quickly enough, as projections of traveler numbers continually proved to be far too modest. With each line a private enterprise (until nationalization between 1884 and 1894) they all received their own terminus, positioned just outside the old city walls. That wasn’t just a construction issue; until 1860, the former line of the city walls also functioned as a tariff barrier (Berliner Zoll- und Akzisemauer), so building your station just outside them meant you didn’t need to pay city taxes.

The first station, the Potsdamer Bahnhof, opened in 1838 as the terminus of the line to, you guessed it, Potsdam. The following decade saw the construction of no fewer than four further stations: the Anhalter (1841), Frankfurter, Stettiner (both 1842), and Hamburger (1847) stations. The Görlitzer (1866), the “old” Ostbahnhof (commonly referred to as “Küstriner” Bahnhof, 1867), and the Lehrter (1869) followed later. In addition, a whole slew (to which we’ll get back) of ad-hoc stations was conceived.

Some of these led only short lives: the Dresdener Bahnhof opened in 1875 but closed again in 1882, while Küstriner (Ostbahnhof) functioned for barely fifteen years before closing in the same year. The first Potsdamer, Anhalter, and Stettiner stations soon needed replacement by much larger buildings to accommodate the increase in passenger numbers. The Stadtbahn, a four-kilometer stretch of elevated railroad and stations, connected some (but by no means all) of these from 1882 (see “Bahnhof to bahnhof”, below)

It took until the 1880s for the first through station in Berlin to be opened, and even then it was an adapted terminus, and the end or beginning for most of the lines anyway. Part of the reason for this lay in the logical status of the national (and later imperial) capital as the end point of a railway line. As I said earlier, Berlin was very much a city to arrive in, not to traverse.

But for an independent company, a terminal also offered all sorts of advantages. Basically, the station was a huge advertisement sign for the company and the city being served. You could control everything for your passengers: not only trains, but also facilities that would serve them before and after. For the city the existence of so many stations was a problem, of course, since you had to be very aware of which destination was served from which station (and sometimes, these could overlap).